Whizkid How an 18 year old was motivated by his father to launch the lightest satellite ever!
on Sunday June 25th, 2017, By Sumeet Patel

Everyone knows about the KalamSat now. That it was launched by NASA and is the lightest satellite (weighing at just 64 grams) ever launched. The face of the mission was Rifath Sharook, an 18 year old from Tamil Nadu, who led a team of 7 belonging to different ;parts of India.

However, this is not the first time the boy and his mentor has been in the news.

In 2015, he had launched a Helium Weather Balloon successfully after winning a similar competition that was held in India, under the guidance of Dr Srimathy Kesan, the Founder and CEO of Space Kidz India. 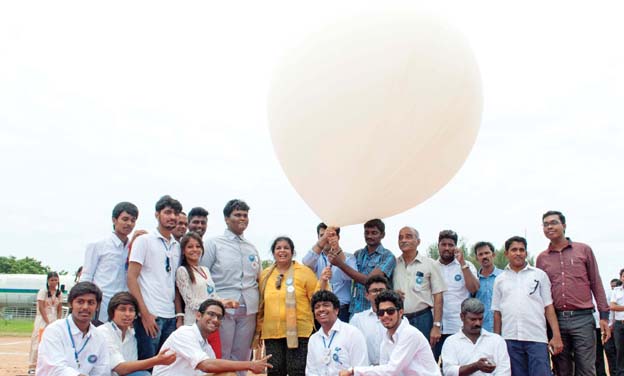 Coordinator Dr Shreemathi Kesan (in yellow) with Rifath Sharook to her left along with Hindustan University students during the launch of weather balloon on Sunday. (Photo: DC)

Back then, in 2015, when he was asked about his inspiration, he said,  he loved exploring things since his childhood days. When he was five years old India launched a rocket. At that time his father worked in ISRO. But the rocket had burst.

Back to the present achievement, under the supervision of Dr Srimathy Kesan, and led by Shaarook, the other members of the team are Tanishq Dwivedi (flight engineer), Vinay S Bhardwaj (design engineer), Yagna Sai (lead technician), Mohammed Abdul Kashif (lead engineer) and Gobinath (biologist)

Now to the engineering part of it The man of the moment, Rifath Sharook

“It’s a 3-D printed satellite. It is for the first time that 3-D printing technology is being used in space. We have made history. The world’s smallest satellite has been launched in space. It was not possible without my team,” Sharook told ANI.

Salient Features of the KalamSat

Sharook’s project was sponsored by ‘Space Kidz India’, and points to his keen interest in space. He has also subscribed to the NASA kid’s club.

If talent was the only thing necessary to be successful, there would be more people in the Most Successful People list. Hard work and perseverance is something Dr. Kalam always vouched for.

All of us do not have equal talent. But all of us have an equal opportunity to develop our talents

Co-founder, Writer and Editor at Ten. I like writing on Life and Entrepreneurship. New concepts and innovations inspire me

A team from IIT Bombay led by Mr.Mohammed Kasim have successfully launched a laptop worth Rs 9999/- It comes flushed with latest softwares and hardware.

Catch the top 10 Priya Varrier memes of this month

We all know well that Priya Prakash Varrier has disrupted the social media with her killer looks. The 18-year old girl from Thrissur, Kerala is now world’s 3rd highest celebrity on Instagram to gain more...

What comes to your mind when you see this? Or this? Sports car, race car? Probably Formula One! What if we told you that there exists a team in a Mumbai college that builds such...

Enthusia is a national level intercollegiate Sports Extravaganza of one of the premier engineering institutes of the country, VJTI. Enthusia 2K17 is scheduled to be held at the VJTI campus at Matunga, Mumbai from 8th...